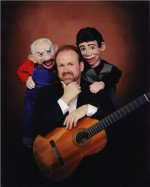 David Malmberg- Throughout the show, voices and sounds appear to be coming from everywhere except the stage! Telephones ring, voices echo and horses gallop. The wisecracking antics of Simon Spencer and Americas grouchiest farmer, Leonard Cribble provide one sizzling laugh after another. Leonard loves to single out, joke and flirt with audience members while Simon seems to think its his job to disrupt every serious moment on the stage. This is especially true while David attempts to play his guitar. Davids incredible skill and versatility will leave your audience in stitches. 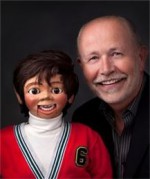 Jerry Breeden – ENTERTAINMENT AT IT’S BEST!!! Make Your Event “An Evening to Remember”!!! Ventriloquist Jerry Breeden and his cast of characters are Hilarious!!!………..Featuring “THE AMAZING HUMAN PUPPET” where an unsuspecting Audience Member Becomes “The Star of the Show”!!! This fast paced show features multiple characters performing comedy routines, famous songs and magical moments. Your audience will be on the edge of their seats……or rolling in the aisles! Corporate Clients, Schools, Fairs, Fundraisers, Cruise Ships, Special Events. He has delighted audiences across the U.S., Canada, Mexico, Cuba, Jamaica, Japan, Italy & Finland. Jerry is loved and appreciated by audiences everywhere! Ask about The Jerry Breeden Ventriloquist Variety Show…..A full evening of great entertainment. Jerry starts out with his ventriloquist act, approximately 45 minutes, before a short intermission. He comes back on stage with his Electric Guitar performing standup comedy and funny song parodies. Then he takes the audience on a “Trip Down Memory Lane” with the Hits of the 50’s, 60’s & 70’s finishing the show with a NAME THAT SONG Contest……..Lots of Great Audience Participation….LOTS OF FUN!!!